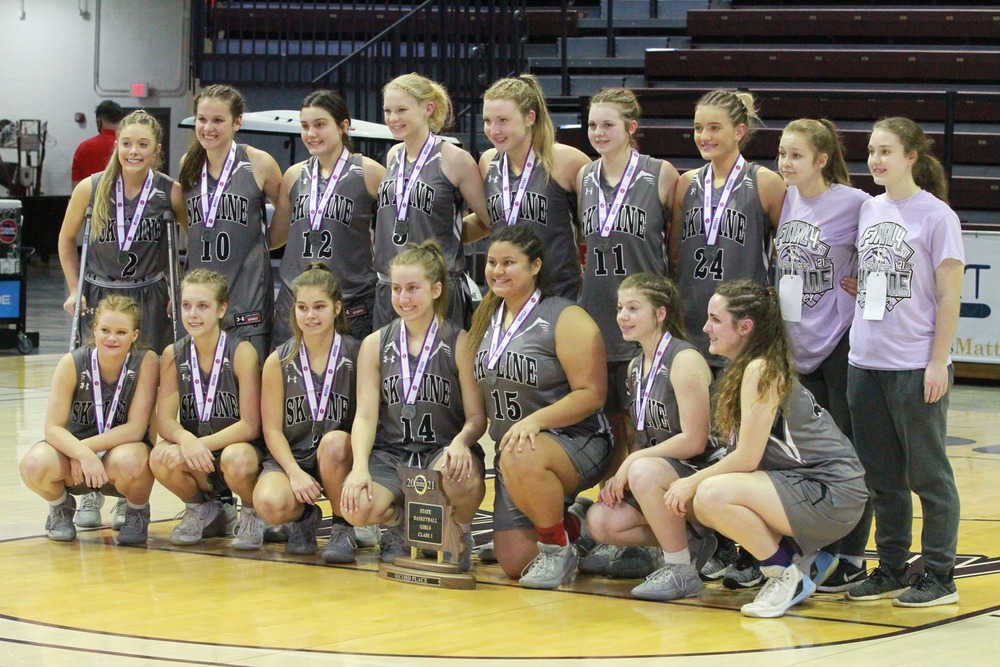 Congratulations to the Skyline Lady Tigers

Congratulations to the Lady Tigers on their State Runner-up Title!!

Miranda Quennoz led Skyline with 21 points. Justine Barb, who battled through a knee injury most of the game, had 20 points and nine rebounds.

Afterwards, a teary-eyed Barb reflected on the toughness and resiliency Skyline showed this weekend.

The Lady Tigers made it to Saturday’s title game by overcoming an eight-point deficit in the fourth quarter and beating Tipton in overtime on Friday.

“We were able to come together,” Barb said. “We’ve never played as close together as we played this weekend. There’s not many teams that can say that, that can say they put everything out there. We have nothing left. It was all out there.

Lift for Life outscored Skyline 24-13 in the decisive fourth quarter.

Taylor Brown made a pair of free throws with 2:15 left to give Lift for Life its first lead (46-45) of the second half. Kanise Mills had a three-point play on the Lady Hawks’ next possession that made it 49-45.

Skyline didn’t have enough left for a second straight comeback.

“When Lift for Life finally took the lead, I don’t know if our kids thought they couldn’t do it, they just realized how hard it was going to be,” said Skyline coach Kevin Cheek. “After last night’s comeback, there wasn’t a lot left in the tank. It wasn’t because they weren’t fighting.”

Barb scored with 1:06 left to bring Skyline within 49-48. Lift for Life went 7-for-8 at the free throw line in the final minute to hold off the Lady Tigers.

Brown led the Lady Hawks with 22 points and was 9-for-10 at the free throw line.

Skyline had to adjust its lineup after Barb and Alyee Gunter suffered knee injuries in the first quarter within a span of about two minutes.

“I was starting to look for bodies at that point,” Cheek said.

Barb returned to the game. Gunter watched the rest of the game from the bench with a big ice pack taped to her knee.

“Tonight kind of signifies what this team accomplished this season,” Cheek said. “We had a plan. With an injury, the plan changes on the fly. We had to grind through that. That’s how they attack everything.”

It was another night where perimeter shots weren’t falling. Skyline, which was 0-for-10 on 3s against Tipton, made only one of 10 3-point attempts Saturday night. Skyline shot 16-for-50 overall against Lift for Life.

Skyline also had two players foul out. The Lady Tigers got a big lift from reserve Taylor Hunt, who scored eight points and grabbed five rebounds.

“It’s such a great group of girls,” Cheek said. “When we take the floor, I don’t know that we look like we’re very intimidating. But there’s a good chance (our players) will out-work people and they play so well with each other.”

“We got a lot accomplished,” Barb said. “I’m so proud of our team. Everyone got so much done. We’re still really proud, even though it didn’t come out the way we wanted.”